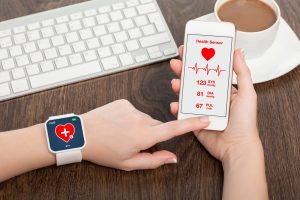 Consumer healthcare apps linked to smartphones or wearable devices are growing in popularity, and forthcoming offerings from Apple and Google are likely to draw more attention to the field. These systems allow users to monitor a range of information—heart rate, calories burned, distance walked—but they don’t guarantee a change in behavior, much less an improvement in health.

Still, many doctors and clinicians see great potential for mobile medical apps. According to an April article in Modern Healthcare, 2013 “saw the beginning of convergence between devices and apps used by clinicians and those used by consumers.” In the future, experts see the integration of consumer apps and devices into “a comprehensive healthcare and wellness information system,” that could enable medical professionals to help patients manage their health, according to the report.

The ubiquity of smartphones and tablets is creating opportunities for that to happen, but hurdles remain, including the as-yet-uncertain regulatory demands on those who create and deploy apps that not only take measurements but actually prescribe a course of action for a patient.

When used in a clinical setting monitored by physicians, mobile apps are already leading to improved health. In a recent cardiac rehabilitation program at the Mayo Clinic, patients who used a smartphone-based app developed by the clinic to record daily measurements such as blood pressure, weight, blood sugar levels, minutes of physical activity, and dietary habits over a three-month period were less likely to be readmitted to the hospital within 90 days of discharge, compared with those patients who followed a traditional regime. The app also provided educational materials that would formerly have been provided via books, CDs, and DVDs. The interactive nature of the process led to improved results.

The cardiac rehab app was developed by the Clinic’s cardiology team in tandem with Dallas-based Healarium. “They had the proper platform already set up,” says R. Jay Widmer, an M.D./Ph.D. who oversaw the program at the Mayo Clinic. “We were able to integrate our requirements, so the task of setting it up wasn’t onerous.”

“Physicians are embracing the trend,” says Widmer, “but there still isn’t enough data on digital health. This program was very specific to the Mayo Clinic and to what we do. I knew it would be successful because of that. But I don’t have the same level of trust for mainstream apps.”

The Mayo Clinic’s digital health efforts extend beyond cardiac rehabilitation. Doctors there are working on digital health efforts in internal medicine, general health, musculoskeletal, and pediatric care. “The trend is likely to keep expanding,” says Widmer. “Digital certainly has the capability to do a lot, but we’re going to need more data to have widespread implementation.”

Among the many benefits digital medicine confers is the ability to extend the reach of doctors. The Mayo Clinic has a number of satellite offices, and mobile apps allow patients even hundreds of miles away to check in with physicians. This isn’t just a matter of rural areas; even urban areas can be underserved, says Widmer—but increased use of smartphones and better outreach from hospitals is beginning to change that.

More innovations are emerging at the Center for Digital Health Innovation at the University of California, San Francisco. It is “an oasis of agility,” created to spur a range of innovations from sensor development to consumer-facing self-management apps, enterprise technologies that support research and clinical care, and Big Data analytics, according to Aenor Sawyer, M.D., Associate Director of Strategic Relations.

Four large projects underway at the center include: CareWeb, a “Care-team collaborative platform that uses social and mobile communications technology built on Salesforce.com;” Tidepool, which is building the infrastructure for a new generation of smart diabetes apps; Health eHeart, “a clinical trials platform using social media, mobile technology, and novel real-time sensors to revolutionize heart disease;” and Trinity, which provides “precision team care by integrating patient data with multidisciplinary input and evidence” via secure online collaboration for virtual tumor board and case conferences.

“With Health eHeart,” says Sawyer, “we’ve been able to leverage social media, data aggregating platforms, and remote activity and physiologic sensing, to extend the reach of clinical research. Participants can go online, create a profile, provide their history, and update their outcomes. They can also send genomic information back to us through a ‘spit kit.’ It has rapidly increased patient recruitment by magnitudes over traditional methods, at a fraction of the cost.”

For the Health eHeart, which combines a Web-based program with a mobile app, the center partnered with sensor maker AliveCor to offer remote access to electrocardiography; physiological sensor company iHealth; and Ginger.io, which helped create an aggregating dashboard and patient portal.

The center’s CareWeb “is putting into a single secure platform all the ways we communicate as a care team in the hospital—phone, e-mail, voice, text, medical records,” says Sawyer. “There will also be a portal so the patient and designated family can access the information, making them part of the care team.”

Many of these projects ultimately become products, available to other centers and consumers, says Sawyer. “Our frontline innovations undergo extensive evaluation during development and after implementation.” Once we have shown, through proof-of-concept testing, that they are effective in care and cost, I feel we are obligated to get these solutions scaled up and out of the university, into the world to provide greater benefit.”