Advances in telehealth are changing the way health care is delivered in the Cincinnati area.

In Springdale, robots equipped to give quick medical checkups could be the latest technology used to curb the billions of dollars spent every year on hospitalizing seniors living in retirement settings across the country.

At St. Elizabeth Healthcare in Northern Kentucky, seeing your primary doctor may soon be as easy as logging onto your computer.

The telehealth market is forecast to grow as much as 56 percent annually through 2018 to $4.5 billion, jumping from roughly $440 million in 2013, according to the research firm IHS, based in Englewood, Colo.

Proponents say the technology can offer unprecedented access to health care and can curb the budget-busting costs of emergency room and non-weekday doctor visits.

“One of the biggest potential of telehealth is that … we can deliver care where people live,” said Deborah Sampsel, chief officer for innovation and entrepreneurship at the University of Cincinnati’s College of Nursing. “That’s one of the greatest advantages.”

But others warn that telehealth’s explosive growth should be watched with caution.

“Telemedicine has great potential but also the possibility for great mischief,” said Jim O’Reilly, a University of Cincinnati professor of law. “We’re finding more cases where … the doctor comes on video and offers an evaluation from a remote location. In that circumstance, we have questions about whether he or she can actually do an appropriate evaluation.” 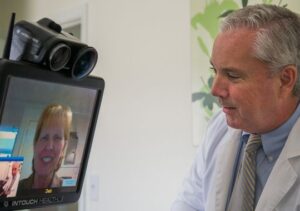 Among the biggest challenges in advancing telehealth is that the services haven’t traditionally been covered by private insurance or Medicaid and Medicare. But that’s beginning to change.

In February, Ohio legislators passed a bill that will provide Medicaid coverage for certain telehealth services. The law calls for standards for such services, which are now out for comment.

More than 40 other states have passed similar laws in recent years; 19 states have laws on the books that require private insurers to cover certain telehealth services.

Some issues remain under debate, such as whether telehealth doctors should be licensed in the the states they’re serving patients.

As health care providers nationally are increasingly getting paid based on the outcomes of their patient’s health, rather than the number of procedures and visits they chalk up, telehealth innovations should be encouraged, said Reem Aly, an associate at the Health Policy Institute of Ohio.

“As we see that transformation, then we’ll begin to see more innovations in telehealth, especially as a way to lose the outcomes and access gaps,” Aly said.

Donated by Anthem Blue Cross and Blue Shield and American Well, the LiveHealth Online console is in the center’s nursing station, and allows residents to connect immediately with a physician via video. Patients can also access a host of console devices that allows them to report their vital signs or send video images to the doctor to help with a diagnosis.

The new tool is helping those served by Talbert House overcome a barrage of health care barriers, including lack of insurance, transportation and inflexible work hours, said Neil Tilow, the agency’s CEO.

“We’re going to see more and more of this as time goes on,” Tilow said.

Since the launch, Talbert House residents have “virtually” visited with providers for issues ranging from head colds to flu-like symptoms, skin rashes, sleep issues and stress.

In the coming months, St. Elizabeth Health Care is poised to launch its latest telehealth pilot: video visits with doctors.

“We expect it to be widely launched by the end of the year,” said Dr. Greg Loomis, CEO of St. Elizabeth Physicians.

The health system just finished a pilot in which it studied electronic visits, allowing existing patients to fill out a form online for minor ailments such as urinary tract infections and upper respiratory infections.

“All of the physicians who joined the pilot found it to be a good way to interact with patients,” said Loomis.

“It’s about the same price of co-pay for an office visit, but the patient doesn’t have to leave their house or their job to come to the doctor’s office,” said Loomis.