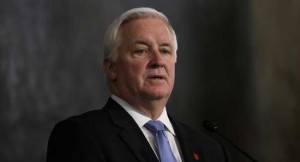 Gov. Tom Corbett’s administration said Friday that insurers are showing strong interest in the Republican’s plan to extend private health insurance to hundreds of thousands of working poor and pay for it with federal Medicaid expansion dollars.

Nine insurers have signed up to provide the Medicaid-subsidized insurance in Pennsylvania, though only one would cover the entire state, Corbett’s office said.

Corbett’s plan, named Healthy Pennsylvania, would not be ready to roll out until Jan. 1, and the federal government must first approve it, since it seeks a long list of changes to the expansion of Medicaid eligibility that was a core part of the 2010 health care law’s bid to extend insurance coverage to 30 million more people.

At least three insurers want to offer coverage in each of nine regions of the state, Corbett’s policy director, Jennifer Branstetter, said.

A key test will be whether Pennsylvania can persuade the U.S. Centers for Medicare and Medicaid Services that its private Medicaid alternative will not cost more than traditional Medicaid coverage would. The Corbett plan would cover the same population as the Medicaid expansion: working adults who make 133 percent of the federal poverty level, or about $15,500.

Asked for a response Friday, a Centers for Medicare and Medicaid Services spokesman would only say that the agency remains in close contact with state officials “and continues to provide technical assistance before making a decision.”

The agency has consistently declined to publicly discuss the details of Corbett’s plan. The 124-page plan was formally submitted in February and closed-door negotiations began in April after a public comment period.

Branstetter said she is optimistic that Corbett’s entire plan will be approved soon by the federal government, albeit with some modifications. She would not elaborate and said that she is keeping the content of negotiations private.

If some or all of his proposed changes are rejected, Corbett will face a decision on whether to take the federal government’s offer in an election year when labor unions, hospital groups, the AARP, medical professionals and advocates for the poor want the Medicaid money to come to Pennsylvania. Some of the changes he is seeking have never been approved in any state.

Corbett, a conservative and staunch critic of Medicaid and the federal health care law, has formulated his plan to be distinct from the Medicaid expansion that conservatives dislike, while still taking the money that would have paid for it.

States were able to expand Medicaid beginning last Jan. 1. Twenty-six states did, including every neighbor of Pennsylvania, and six — Arizona, Nevada, New Jersey, New Mexico, Iowa and Ohio — that have Republican governors. Two states, Arizona and Iowa, are using private insurance companies to offer coverage, and Pennsylvania’s plan is modeled on theirs.