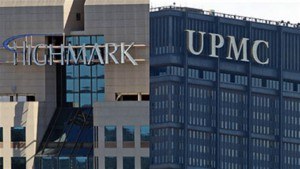 More people in Western Pennsylvania now have health insurance from UPMC than from Highmark Inc., according to a UPMC analysis, marking a potential milestone in the rivalry between the nonprofits.

Highmark, which for decades has dominated the region’s health insurance market, declined to say Thursday whether it has arrived at the same conclusion.

“Highmark will be announcing our enrollment numbers over the next few weeks, and we will be eager to share our 2016 enrollment statistics,” spokesman Aaron Billger wrote in a statement. “It’s never been our practice to comment on competitors’ enrollment.”

Each insurer has about 28 percent of the Western Pennsylvania market, which covers 29 counties, according to the analysis. The numbers represent a major shift from five years ago, when Highmark had 60 percent of the market, UPMC spokesman Paul Wood said.

Other insurers, including Aetna and UnitedHealthcare, collectively account for 29 percent of the market, with traditional Medicare and the uninsured making up the remaining 15 percent. Aetna and United declined to comment on the analysis.

UPMC’s tally combines the commercial, individual, Medicare Advantage and Medicaid managed-care markets. UPMC did not break down the numbers for each market, but Holder said UPMC Health Plan had gained the largest amount of market share in the noncommercial plans such as Medicaid and in plans sold on the Affordable Care Act’s online marketplace.

Highmark might not mind losing some of those enrollees whose medical bills were much more expensive than the premiums they paid in 2015, Foreman said. Highmark reported losing $318 million on the ACA market in the first half of 2015, a loss the insurer attributed to sicker-than-expected people signing up for the insurance.

UPMC did not say how many enrollees in its Medicaid managed-care plan, UPMC For You, it is counting. UPMC dominates the Medicaid market in Western Pennsylvania, which has greatly expanded since Gov. Tom Wolf expanded Medicaid in the state to include all individuals who make up to about $16,000 per year. State data show UPMC For You had 240,000 members in December in a 14-county region in Southwestern Pennsylvania. Gateway Health, a Medicaid managed-care plan in which Highmark has a stake, had about 126,000 members.

Low reimbursement rates for Medicaid make it difficult for insurers to make money through the program.

“My overall impression is that they well could have taken on more membership, but is it really good? Is it paying enrollment or is it enrollment they’re going to lose money on down the road,” Foreman said.

Billger said Highmark has retained 94 percent of its members among employers in Western Pennsylvania, while retaining 95 percent of its Medicare Advantage members.

“If these numbers are accurate, I didn’t expect the market would be this close this fast,” said James McTiernan, area vice president for national consulting firm Arthur J. Gallagher. “I think UPMC has done very well in the small groups or for individuals. UPMC may have the most attractive programs rate-wise.”

“The world has changed for Highmark, and they are dealing with it,” he said. “Right now, both UPMC and Highmark can make equally eloquent arguments as to why they are better than the other. Over the long run we will see what networks performs best when it comes to cost, quality and access. That’s going to take awhile.”

UPMC said its analysis was based on data from the Centers for Medicare & Medicaid Services, Pennsylvania’s Department of Human Services , the 2010 census and other sources.

Also Thursday, UPMC announced $201 million in operating income for the six months ending Dec. 31, up from $192 million for the same period a year earlier.