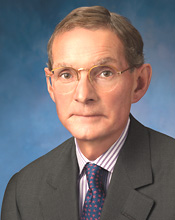 Almost every day, UPMC President and CEO Jeffrey Romoff exchanges emails with the only person with enough power to fire him.

Romoff, arguably one of the region’s most influential and polarizing leaders, reads every word that comes from Nicholas Beckwith, the businessman who chairs UPMC’s board of directors.

“I try not to be bossy,” Beckwith, 69, told the Tribune-Review in an interview in UPMC headquarters in the U.S. Steel Building, Downtown. “Mr. Romoff has a boss, and the boss is the board. I am the conduit. I am, at best, a facilitator.”

During the course of an hour, Beckwith spoke candidly about a man he considers a brilliant leader and stood by the board’s decision to pay Romoff $6.6 million a year, among the highest CEO salaries for nonprofits in the region. Beckwith, UPMC chair since 2002, delivered harsh words to critics and revealed how he made a last-ditch attempt to avert a permanent split with health insurer Highmark Inc.

To remain solvent, he insisted, the state’s largest employer must generate excess cash flow. Since he took over as chairman, UPMC’s operating income has grown from $52 million to $190 million in fiscal year 2014.

“Those people are nuts,” Beckwith said about critics. “A company, to succeed, has to be profitable but eminently successful. A nonprofitable nonprofit is nothing; it’s gone. It’s bankrupt.”

UPMC, which most recently posted total revenue of more than $11 billion, has been widely criticized for putting profit above charity. Critics attack its aggressive growth, aiming attention at its tax-exempt status. They question Romoff’s salary and the yearly pay of nearly two dozen UPMC executives who each make more than $1 million.

“This board is pretty much aloof and invisible,” said former state Sen. Jim Ferlo, D-Highland Park, a longtime critic of UPMC. “They’ve insulated themselves and disavowed any responsibility for oversight or for accepting responsibility to public criticism, whether it’s from public officials or the people who pay the premiums.”

Beckwith said Romoff’s multimillion-dollar paycheck is justifiable. Under Romoff’s tenure, UPMC has grown from a couple of hospitals in Oakland to a network of 20 hospitals that stretch from Western Pennsylvania to Italy.

With more than 62,000 employees, UPMC is Pennsylvania’s largest employer.

“When people ask me about his pay, I say, ‘What would you pay him?’ ” Beckwith said. “If they’re going to understand the brilliance of Jeffrey Romoff, they have to acknowledge there’s no more effective leader in the nation than Jeff Romoff.”

Romoff, a native of New York City, began his UPMC career in 1973 directing education and programming at Western Psychiatric Institute and Clinic. He became UPMC’s president in 1992 and added CEO to his title in 2006. He declined the Trib’s request for an interview.

‘RUN AS A BUSINESS’

A thin, graying man with wire-rim glasses and the look of a bookish patriarch, the Pittsburgh-born Beckwith grew up in a business-savvy family that owned a company that sold earth-moving equipment.

Beckwith worked as a salesman for Murrysville-based Beckwith Machinery and eventually became its CEO. As he managed the company in the late 1970s, an old family friend asked him to serve on a committee at Shadyside Hospital. That provoked an interest in health care, a field far removed from construction equipment but one that Beckwith found fascinating. Both types of companies need to be similarly managed, he said.

“Not-for-profit large corporations have to be run as a business. Anything other than that will ultimately cause a failure of the institution,” he said.

Beckwith, who sold the family business 10 years ago, became chairman of Shadyside Hospital’s board in 1990.

“His vision has always been one of his greatest strengths,” said Tami Minnier, who was hired at Shadyside Hospital in 1990 as associate vice president of geriatrics and now is UPMC’s chief quality officer. She called Beckwith “a gentleman you just instantly want to respect.”

“He believes the board’s job to govern is critical, but he also knows that you hire talented leaders to be your managers and run the business. He’s always respectful of that line,” Minnier said.

Beckwith and other Shadyside leaders in 1995 decided that for the hospital to survive, it would have to align itself with a strong, financially solvent partner. Administrators considered affiliations with The Cleveland Clinic and even the for-profit giant Columbia HCA based in Nashville.

“He was exceedingly bright, knew the industry, was a consummate leader,” Beckwith said.

The merger deal between UPMC and Shadyside Hospital closed April 1,1997. Since then, Romoff and Beckwith have formed a strong bond. They communicate almost daily, and although they have each other’s cellphone numbers, Beckwith said he prefers to reach Romoff through his secretary.

“I usually have my cellphone turned off,” Beckwith said.

Beckwith relies on UPMC’s management to make day-to-day decisions, but he stepped in when contract discussions between UPMC and Highmark stalled in March 2011.

Despite negotiations between Romoff and then-Highmark President Ken Melani, the insurer had resisted increasing reimbursements to UPMC. Highmark pays UPMC about $1.9 billion a year to care for its members. Other insurers had agreed to pay more competitive rates, and Highmark’s were “below market,” Beckwith said.

Beckwith reached out to his counterpart at Highmark, board Chairman J. Robert Baum. The two struck a “handshake agreement that would lead to better pricing for the services we sold,” Beckwith said. A neutral third party would help set the rates.

Beckwith was stunned. While vacationing in Florida, he called Baum from the golf course.

“I told him that if they became our competitor, our relationship would have to end,” Beckwith said.

Baum told the Trib that he remembers the conversation differently. As he sees it, UPMC demanded a “large increase” in reimbursements that Highmark could not support.

Baum said he and Beckwith probably would be good friends if they were not devoted to competing organizations.

The commercial contract between UPMC and Highmark ended in December. The split sparked renewed criticism toward UPMC that Beckwith is inclined to dismiss, saying that what he witnesses is more of a “bifurcated, split personality” concerning UPMC. Those who criticize UPMC for sticking to a corporate mold are the same people who applaud its quality health care, he said.

“Everybody who is ill, they want to come to UPMC,” he said.

The board has no plan to replace Romoff, who turns 70 this year, although a board committee actively meets to identify potential successors, Beckwith said.

“There’s nothing imminent,” he said. “We couldn’t be happier.”

Call Us Today      Get Started