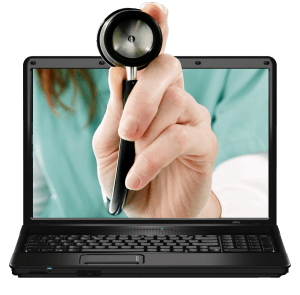 Health insurers want you to see the doctor, just not necessarily in an office or hospital.

To cut medical costs and diagnose minor ailments, WellPoint Inc. and Aetna Inc., among other health insurers, are letting millions of patients get seen online first.

In a major expansion of telemedicine, Indianapolis-WellPoint this month started offering 4 million patients the ability to have e-visits with doctors, while Aetna says it will boost online access to 8 million people next year from 3 million now.

The insurers are joining with companies such as Teladoc Inc., MDLive Inc. and American Well Corp. that offer virtual visits with doctors who, in some states, can prescribe drugs for anything from sinus infections to back pain. While patients with time constraints like the idea, some doctors say they worry that online visits may offer a higher potential for wrong diagnosis. A stomach ache may be nothing, or it could be appendicitis, said R. Adams Dudley, at the University of California, San Francisco.

“Just one little touch can make a big difference” to feel where the pain is at, said Dudley, a professor of medicine and health policy at the school. For symptoms doctors need to see, “some computer screens just don’t have the best resolution, and you can’t really adjust the lighting.”

That can make it difficult for even something as simple as looking for a film at the back of the mouth or finding excess pus in the sinuses—signs that help determine whether a patient needs antibiotics, or simply has a common cold that will go away on its own, Dudley said.

The board-certified physicians involved in the practice don’t necessarily disagree.

Peter Antall, a pediatrician, heads the Online Care Group, which provides doctors for American Well. He says that while “there are some things we can’t do,” he remains confident that doctors from his group have the skills to know when more intense care is needed. At the same time, online care can serve a host of needs, he said, from cutting consumer and insurer costs to giving busy or isolated patients easier access.

It’s a debate that has included the American Medical Association, which last month offered new guidelines to shape telemedicine’s development; state licensing boards that agreed on their own draft policy in April; five of the nation’s top publicly-traded health insurers; and a small group of closely held telemedicine companies convinced their time has come as concerns about medical cost and access rise.

The discussion promises to escalate as patients become increasingly sophisticated in their online pursuits, delays in making doctor appointments grow longer, and the cost of services provided by medical centers increases.

“More and more patients are comfortable seeing a physician online,” said CEO Jonathan Linkous of the American Telemedicine Association by telephone. “It’s an adoption process. They understand it, and use it.”

Jennifer Forsyth, who runs a Pennsylvania-based not-for-profit called Donate Local Pittsburgh, said the idea of not having to trek to a busy urgent care center or ER drew her to telemedicine just before Christmas last year.

She had a migraine and a stuffy nose, she said, and the doctor she normally sees was unavailable over the holiday. So she checked in with Teladoc, offered free through her insurance plan. She was quizzed about the pain and what it “felt like” when she pressed her sinuses, she said, before getting a prescription for an antibiotic.

“When you’re sick on a holiday and you don’t have a doctor around, you don’t even have to leave the house,” she said. “If it’s something minor like that, where you pretty much know what you have, it’s very convenient.”

Consumers in plans with high-deductibles who pay a larger share of their up-front health care costs also like the plans, said MDLive CEO Randy Parker.

The median cost for an ER visit has risen to $1,223, according to a study published in 2013 in the journal PLoS ONE. Meanwhile, it costs less than $50 to visit Teladoc, American Well or MDLive, according to the company websites.

With “the risk of the payer shifting to the consumer,” telemedicine’s lower costs can offer a significant advantage to consumers, Parker said.

The service is “literally flying off the shelves,” Larry Gleit, director of product strategy for Bloomfield, Conn.- based Cigna, said.

While cost is one advantage, easy accessibility is another. All three sites also offer mobile apps, and the same availability to doctors as most ERs, with 24-hour, 7-day service, according to the websites.

The primary-doctor shortage alone has many doctors walking a thin line between supporting the concept, and criticizing it.

The AMA, the nation’s largest organization of doctors, on June 11 said in a policy statement that there were “significant benefits” of telemedicine.

At the same time, the group called for the doctors using it to make sure they had a “face-to-face, in-person relationship” with a patient before diagnosing them across the Internet. The guidelines also say physicians must be licensed by the state where the patient lives, that there be strong privacy protections, and an easy way to refer patients for more care.

State medical boards are also involved, in some cases limiting the ability to issue prescriptions online, or requiring pre-existing relationships before care can proceed.

Licensing rules that change by state have created challenges. Teladoc, for instance, has suspended service in Idaho until disagreements over the state’s rules are resolved. American Well doesn’t operate in five states because of their limits, and won’t prescribe drugs in several others.

Those limits have spurred industry calls for an easier way for doctors to practice in multiple states, possibly by creating a federal licensing process for telemedicine.

“We only work within the context of the existing regulations, but we do think federal licensure is worth considering,” said the Online Care Group’s Antall.

The Federation of State Medical Boards, a national organization, released a draft policy for a multistate compact setting standards for telemedicine practice in April. The policy would make it easier for doctors to practice online while still making them subject to the authority of the medical board in individual states.

Antall recalled one case, he said, in which a patient wasn’t planning to go to the ER. An American Well doctor diagnosed them with a pulmonary embolism, sending that person for emergency care and possibly saving his life.

“We can save payers money or employers money and that’s all well and good, but if we can save someone from having a stroke, that’s big,” Antall said.

WellPoint started incorporating electronic visits as a benefit for more than 4 million members in 10 states in July and UnitedHealth Group Inc., the largest health care insurer by market capitalization, began a pilot in January with 310,000 people in Nevada. Both companies also offer access to the American Well service for a flat fee.

“Everyone is looking for less expensive alternatives to get care,” said Jason Gorevic, the CEO for Dallas-based Teledoc.