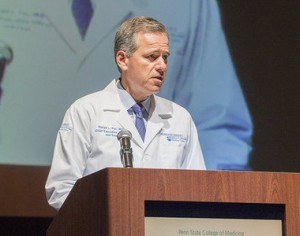 Just two weeks after he announced plans to join Penn State Milton S. Hershey Medical Center and PinnacleHealth to create one giant health system, the CEO of Hershey announced he is leaving to take a post with Aetna.

Dr. Harold L. Paz, who was slated to serve as CEO of the PinnacleHealth-Hershey system when it comes into being in about a year, will instead serve as executive vice president and chief medical officer of Aetna. At Aetna, according to a news release, Paz will lead clinical strategy and policy “at the intersection of all of Aetna’s domestic and global business.”

His last day at Hershey — where he also serves as Penn State’s senior vice president for health affairs and dean of its College of Medicine — will be July 28. He has been with Hershey since 2006.

Penn State President Eric Barron appointed Dr. A. Craig Hillemeier to serve as CEO, senior vice president for health affairs and dean of the College of Medicine upon Paz’s departure. Barron indicated he will hold a national search for the role, but did not set a specific timeline.